History is filled with what we might call 'defining moments'. For New Zealand, I think we would have to count as one of those that moment when a reportedly drunk Prime Minister Robert Muldoon called the snap election in 1984.


That election brought to an end one era in New Zealand political and economic history and heralded in another, the age of neo liberalism, as it saw Muldoon's government defeated, and the Fourth Labour Government lead by David Lange come to power. Here is a definition of neoliberalism that I found randomly on the web, and it seems as good as any:


"Neoliberalism is a term for different social and economic ideas. ... Neoliberalism is characterized by free market trade, deregulation of financial markets, individualisation, and the shift away from state welfare provision."

The newly elected Labour Government (remember that these were 'first past the post' election days) began our journey down this path with what came to be dubbed 'Rogernomics' after the Minister of Finance Roger Douglas. It heralded in decades of competition like we had perhaps never seen before, and in areas of life in which we had never seen the likes before. And so began the cult of the individual. 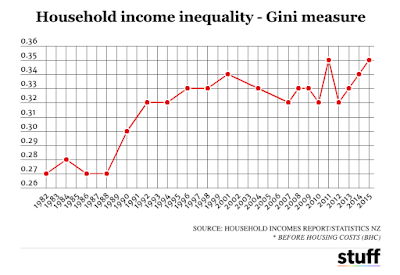 So we entered this period of competition, Friedmanites we all, (well most of us), believing that this was the best pathway, the best medicine, for what many might have described as a moribund economy. However we allowed competition to enter those other walks of life too, in particular education.

What we didn't know at the time was that this free market ideology and the corresponding increase in inequality would actually harm us all, and in a way that we hadn't predicted. It actually reduced economic growth. That is, our material wealth increased at a slower rate when inequality increased. We had thought that the opposite would be true. This comes from an OECD report (pretty reliable stuff I'd have said):

"To explore the question further, our study estimated a relationship for GDP per capita in which a change in income inequality was added to standard growth drivers such as physical and human capital. The idea was to test whether the change in income inequality over time has had a significant impact on GDP per capita on average across OECD countries, and if this influence differs according to whether inequality is measured in the lower or upper part of the distribution. The results show that the impact is invariably negative and statistically significant: a 1% increase in inequality lowers GDP by 0.6% to 1.1%. So, in OECD countries at least, higher levels of inequality can reduce GDP per capita. Moreover, the magnitude of the effect is similar, regardless of whether the rise in inequality takes place mainly in the upper or lower half of the distribution."


We have had competitive schools since 1989 and 'Tomorrow's Schools'. The school choice model had its strong advocates, some going as far as suggesting a 'voucher system' that allowed complete freedom of choice. We have retained a modicum of control, despite the offical policy of the ACT party and David Seymour, both of whom support the school choice model.

How have we gone? Well it's been good for some. It has created winner and loser schools, but I would suggest not for the reasons we might have thought. One of the foundations of free markets, the idea of full and complete information and rational decision making, simply does not hold true in education, nor in any market for that matter. We do not have complete information, and we do not make rational logical choices. We make emotional choices based on incomplete information. So those schools 'perceived ' as being better were the winner schools, while those 'perceived' as being worse, were the losers.

This all misses a fundamental truth. Education is most effective when it is a collaborative activity. It is most effective when students collaborate, and when teachers collaborate, and when schools collaborate. You see, education is NOT a zero sum game. We don't educate one person or group at the expense of another. What's more society couldn't afford that even if it were true. To write off one section of society so that another can benefit has to be the biggest waste of human capital ever. We don't want winners and losers in education. We want winners and winners.

Over this past term I've seen two truly outstanding examples of the benefits of collaboration in education.

The first was within our own Uru Mānuka cluster. All teachers are expected to undertake 'inquiry'. This is intended to support teachers to use an evidence base to improve their practice and therefore the learning of students. This year we have run a number of Professional Learning Groups not only within Hornby High school, but across the cluster. Teachers from multiple schools have joined together to inquire into their practice, looking for better ways to cause learning.

Several weeks ago we had a celebration of that work, with teachers making presentations to staff from across the cluster in which they presented the 'gold nuggets', those pearls of wisdom that they had gleaned about how we can imporve learning.

Some photos of the 70+ staff from across our cluster celebrating their own learning: 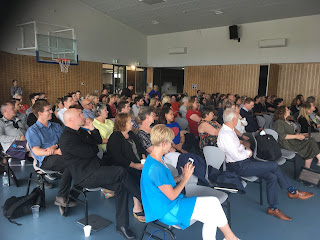 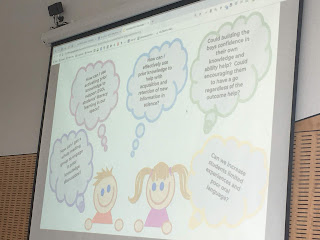 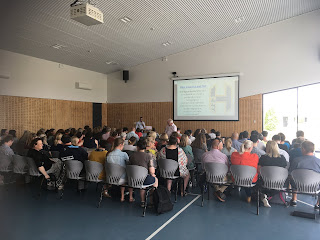 One of the things that was patently clear in all of this is that teachers often don't need professional learning 'done to them'. They most often have the solutions to improving learning 'in the room', that is amongst their peers, their colleagues, often within the same school, and most definitely in our case within our cluster.

Then earlier this week I was able to join educators from most secondary schools in Christchurch at a hui organised by Grow Waitaha. Its purpose was to develop a secondary school community of practice designed to share experience in the work that individual schools have been doing to improve learning, whether it be with curriculum innovation, the use of spaces, or pedagogy. 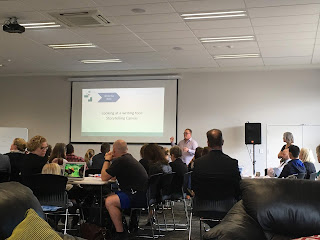 The outcomes of all of this work are better learning outcomes for our tamariki. Empowered teachers, teachers who are happy to try new things, to take risks, means that our tamariki are better off.
Why do we need this innovation? We have a tail of underachievement in New Zealand. That tail is significantly longer and larger than in most equivalent OECD countries. This tells us that our system is not working for a significant number of our rangatahi. We need to change, otherwise that human potential, that human happiness, is lost to us as a society.

These things don't happen when you are in competition. Competition disincentives sharing and collaboration.

These examples are schools and educators saying we will NOT compete, we will collaborate. This is educators saying "media, your b***y league tables are a nonsense', they are counter-productive, they are reducing chances for too many of our children. This has to stop."

We've had enough. We are making the changes. We are innovating. Get out of our way if you oppose this, because we are coming through. The moral imperative is strong in us all, that's why we do what we do.

Email ThisBlogThis!Share to TwitterShare to FacebookShare to Pinterest
Labels: aspiration