It's all in the words we use - let's 'talk (educational) dirty'

Yesterday I attended one of those meetings that we seem to increasingly have in education these days. They are meetings filled with optimism, yet at the same time they can feel a little conspiratorial.


We were there to talk about how we might get back to building collaboration across the secondary school network in Christchurch. This was something organised by Grow Waitaha that appeared on our 'landscape' in 2016/2017 and was, after its brief flourish, killed stone dead. We used words like collaborate, innovate, improve, as if we were a group of third world conspirators plotting the downfall of the world as we know it. Indeed you could be forgiven for thinking that using the word 'innovative' in education at the moment feels a little like 'talking dirty'. Such is the climate it would seem is being created by our media. Why research an issue in depth when you can make superficial sensational claims that will satisfy editors' demands for yet more click bait? I guess we shouldn't be too harsh on our reporters. Maybe what we are seeing is their initial responses to the disruptive influences of technology. Media owners seem intent on reducing reporter numbers in order to cut costs and drag in the advertising dollar. But that's another story.

But here's the point: this is about our children, about their future (and ours), and superficial clickbait will NOT do.

If I use the word 'innovate' I am, it would seem, likely to be labelled as 'experimental'. If I talk about 'collaboration' it seems that I am likely to be labelled as someone who wants all children to learn in huge groups taught by several teachers in an out of control environment where mob rule is the norm. And of course that is the norm whenever a school is rebuilt, isn't it. Forgive me for cringing in the corner, won't you.

On the other hand, if I use the words 'school improvement' I am perhaps seen as being a moderate, nay conservative, educator who doesn't really intend to do more than tinker around the edges.

We all proclaim that we want better educational outcomes for our children. Well, helloooooo .. doing the same thing and expecting a different result is Einstein's definition of insanity. To get better educational outcomes things have to change. Who says that doing things the way we have for the past 150 years was the best anyway? Echoing the critics of change, show us your evidence that the past 150 years were 'best practice' and gave us the best outcomes we can hope for? It seems to me that it only ever worked for the privileged few, those of European descent and of middle class background.

All schools need to innovate, all schools need to be empowered to have the courage to innovate, to try new things. And most (if not all) schools have built into their structures and processes the innovative mechanisms that drive that improvement. It's just that some are taking bigger steps than others at any given point in time.

I had the privilege of sitting in on the mid year report back of members of our staff team from their Professional Learning Groups, as they fed back to colleagues the results of their inquiries so far this year. What I saw was 'gobsmackingly good', it was exciting. No one thing that I saw represented a quantum leap in change, each was a small incremental change in teaching practice. But here's the thing: small incremental change for each individual teacher represents large change for a kura.

For those who don't know (cue: take note, Media friends) Teaching as Inquiry is our key improvement process, our key way to generate teacher learning and better outcomes for learners. It is recognised as perhaps the best way to help teachers to learn, to up-skill, to better meet the individual needs of the learners they interact with daily. I could go on, but you get the idea. For those who don't know (yes, media .. this one is for you) the process looks like this: 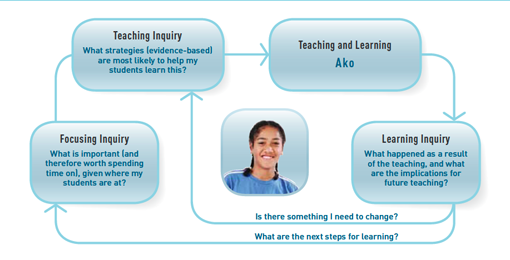 This is innovation. This is empowering. This is exciting. This is what leads to better outcomes for learners. It does also underpin more significant kura wide change. It empowers us as teachers to try new things, to be prepared to take risks, and risk taking is important because without it we get no change.

And all of those things I have described are informing our whole school evolution, whether it be Chromebooks and digital learning (Manaiakalani), curriculum change, or pastoral systems. Our school wide improvement data continues to be impressive. Take this writing data, tracked across a three year period form the beginning of 2016 to the beginning of 2019.

The data uses 'matched pairs', so a student had to be include in the testing at BOTH the beginning and the end to be counted. The right hand column is the one to focus on. If that number is 0, then students have made exactly the progress in their writing that you would expect over three years. If it were negative, then they would have made less progress than expected, and if it is positive then they have made more progress than expected. This is called acceleration. They are progressing faster than you would expect. A student can be expected to make 9.5 points of progress per term, on average. Our nYear 10 students made just under nine terms more progress than expected over that three year period. Framing that another way, we accelerated their writing progress by nine terms more than children of that peer group did on average across the country. This is extraordinary.

If by doing all of this we are, suddenly. an experimental school, then so be it.

And when undertaking inquiry, we all acknowledge that sometimes the hunches that teachers have are wrong, or the strategies they try out don't work. And do you know what? That's ok. Because learning that something doesn't work is just as useful as learning that it does. And it's better than doing nothing.

The media seems intent on beating teachers and schools over the head when they try new things. Schools come at this driven by the moral imperative to do better for our children. I am frankly not seeing much of that in the media these days. The climate being created by this approach will only serve to drive innovation out of the system. Or where it does occur, it will seem more like some sort of guerrilla activity, some clandestine operation undertaken in the dark of the night.

And this must be much like the innovators who began Manaiakalani must have felt in their early days. Maybe they didn't, or maybe the media had a different approach ten years ago. But thank goodness those innovators did. The outcomes for our rangatahi are amazing. We accelerate learning in writing by (on average) twice national averages. We accelerate improvement in reading and maths by (on average) one and a half times national averages.

We are out to liberate our young people from the tyranny of 150 years of educational practice that has served too many of them poorly. And that is NOT a plea to 'throw the baby out with the bath water'. There is much in what we have done that is good. However it is no longer enough. Here we go with this same image: