So what are they meant to learn?

The world is changing at a faster and faster pace.  Experts talk about 'exponential change'. That is, not only is change happen but it is happening at a faster and faster 'rate'. It's like gradually pushing your foot down further and further on a car accelerator as you travel down the road. The question that has confronted education for a long time is therefore what are schools meant to teach?

I have written several times now about the changes that are happening in the workplace, the changes that our current young people will face within the early years of their 'working life' (whatever that might look like).

In 2015 the World Economic Forum (in conjunction with the Boston Consulting Group) prepared a report titled 'New vision for education' in  which it outlined what it thought schools should be doing, where schools should be going.

It's story is the same story I've described with reference to Yong Zhao. For example, WEF present this data on the changes in the types of skills being demanded globally of workers:

So routine skills of the sort that many would have assumed offered good job prospects are simply disappearing. Look at the skills that are increasing in demand. BOTH are non routine, because anything routine can be automated, that is replaced by technology. One is that of interpersonal skills - dealing with other people. The other analytical - making sense of the world. Neither of these is currently easily undertaken by technology.

They go on to describe the types of skills that we will increasingly need as this century progresses. Here is their summary: 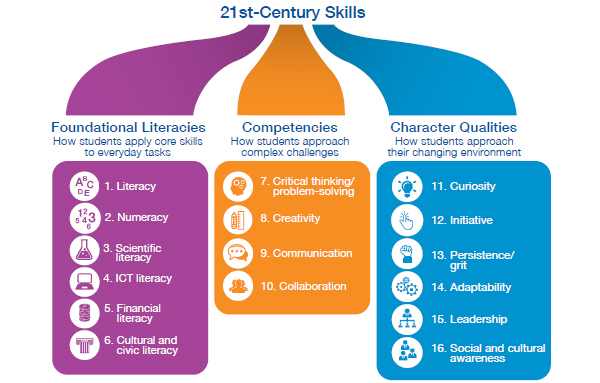 The middle (orange) block describes basic competencies, those that we describe within our New Zealand curriculum in part with our key competencies. It is my opinion that creativity is the key. In a previous post I used the term 're-imagining'.

The more immediate and more pressing question is how we will get there. I don't think there is one path, there are many paths. For us at Hornby High School our 'connected curriculum' across years 7-10 is our critical pathway, and that connected curriculum will involve more project or passion based learning and less direct instruction. That is not to say that direct teaching is dead. It isn't. It means that direct teaching is no longer enough.

This is risky ground for any school, but we don't have much choice. Time and the world move on. We can either get on board or lag so far behind that we become irrelevant. Our young people, our precious tamariki, are the ones who will pay the price if we don't.
Posted by Robin Sutton at 21:53